October 31st is quickly approaching, which can only mean one thing: candy hungry trick-or-treaters will soon descend upon doorstops across the United States. With an estimated 41.2 million (United States Census Bureau) potential trick-or-treaters in the U.S. alone, candy manufacturers have to produce a lot of candy to meet the demand of consumers during the Halloween season. How early do candy manufacturers start preparing for Halloween? What role does a food scientist play in the preparation process? Fortunately James St. John, Sr. Director of Global Chocolate Product Development at The Hershey Company has provided some insight into Halloween candy preparation. The ever popular Candy Corn. Image from agoramedia

According to St. John, preparing for Halloween is no easy feat. The Hershey Company has a special team of people whose sole job is to organize everything related to the Halloween candy launch each year. These team members begin preparing for Halloween at least 2 years in advance.  That’s right, they started gearing up for Halloween 2015 way back in 2013! Hershey’s clients such as Wal-Mart and Kroger drive candy production for the holidays. Essentially the candy developed and sold for a holiday is all based on what the client desires to stock/sell during that year. Everything from packaging designs to the candies inside them are designated by the client, then the brilliant minds at Hershey’s get to work making these desires a reality.

The Hershey Company has many classic candies that consumers have come to know and love. Hershey Bars, Reese’s Cups, Kit Kats, and Twizzlers are just a few of their many iconic brands available for purchase year round. For Halloween, the only change products like these receive is a new “costume” consisting of festively themed packaging.  However, St. John mentioned that a generous amount of product development occurs to create new flavors and product concepts, like Candy Corn Kisses, that will be debuted for the holiday. Hershey’s food scientists create products for two main reasons: because a client pitched them an idea for a new product or line extension or because The Hershey Company has developed a new technology that can be applied to candy production. In the case of a completely new product concept or technology, the development process could take up to five or more years. In general, the food scientists have a year to create the new product, which is presented to clients one year prior to the product’s intended launch date.

“Bloom” on chocolate is off putting from consumers.

St. John also elaborated on another important factor to be The Hershey Company considers when producing Halloween candy: quality. In the food industry, the term quality refers to aspects of a food product that affects its likability and acceptability NOT its safety. The Hershey Company strives to produce consistent quality products so that when consumers open, say a package of Reese’s Cups, they have the same organoleptic experience every time. Additionally, a major area of concern Hershey’s food scientists research is the shelf life of their candies. Shelf life is that amount of time, after being manufactured, that a product maintains an acceptable quality. This is what those “best by” dates printed on food products are referring to.

An instrument used to test the technology of delicious chocolate treats!

Food scientists study the candy over a period of time until the candy exhibits a “mode of failure, which is a defect in a food’s quality that makes it no longer acceptable or desired by consumers (note that this too has nothing to do with the product’s safety). Some of the common modes of failure in candy are sugar crystallization, lipid crystallization/migration, and lipid rancidity. St. John explained that some candies such as dark chocolates, which are rich in antioxidants that prevent lipid oxidation and thus rancidity, inherently have a longer shelf life than other candies. Each type of candy has a different mode of failure, so food scientists study and devise specific strategies to maximize the shelf life of each and every candy they manufacture. Some tactics they use to combat/delay modes of failure include changing the time/temperature, at which the candy is processed, adding ingredients like antioxidants to prevent oxidation/rancidity, as well as roasting and/or enrobing inclusions like nuts in chocolate to prevent oxidation reactions. 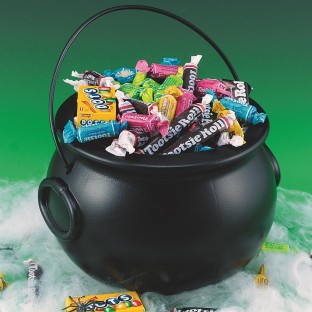 So this Halloween, as consumers indulge in their favorite festive sweets, candy manufactures like The Hershey Company will already be preparing products for next year’s holiday. As for the food scientists, they’ll be applying all the tricks of their trade to provide tasty treats for all to enjoy.

Previous Article Quality signs you should take the QA route

Next Article   Turmeric – The New Superfood